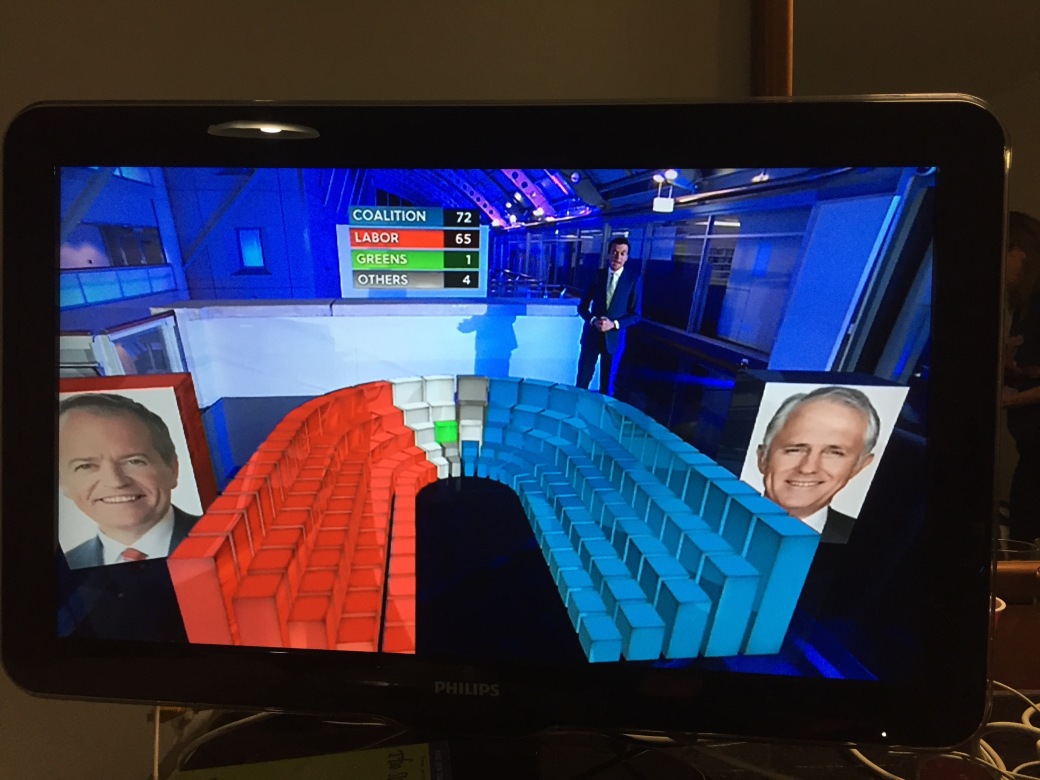 Here on our last day, it is election day in Australia and the country is voting for a new government. As I write this shortly after 8:00 in the evening as polls here are closing, they are having election night coverage not unlike the US, with sitting Prime Minister Malcolm Turnbull and the Liberals (conservatives here, and “Coalition” in the pic) vs. challenger Bill Shorten and the Labor Party making a strong showing. Then there are the Greens and miscellaneous other parties as well who may slightly tip the balance of power in this, a very close race in Australia. (Interestingly, the red vs. blue seats are reversed – left=red, right-blue.)

While our kids were in school at Leichhardt, I had the opportunity to teach a couple classes to the 10th year and many of the questions from the students were about our election in the US, with Hillary Clinton, Bernie Sanders, Donald Trump, etc. While there is more drama, more personal pyrotechnics in the US, it is interesting to follow the Australian election in which bombastic rhetoric is less important than a sincere discussion of the issues. Those issues: taxation, social supports vs. corporate investments, climate change, health care, etc. are similar to the US, but the spokespersons – politicians, party representatives, and others – are gentler, friendlier, and seem to lean to the center no matter what side they’re on.
As I post, just before 9:00 pm in Brisbane, the news analysts and pundits are not making predictions even though it seems that the Labor Party is doing better than expected. Perhaps I’ll update with post with results or commentary…
UPDATE on July 3rd: We woke up to an almost dead heat in which news commentators report that votes must still be counted. It looks like Turnbull and the Liberals will retain power, but have lost seats in Parliament to the Labor Party.
Study Questions:

One thought on “Australian Politics”